Educators, schools and government bodies around the westernised world today are focussed on ensuring they keep pace with the rapidly developing space of 21st century education.

Students of today have access to a vast array of resources, technologies and choices which were not readily available a decade ago, and some of which did not even exist 15 years ago. Facebook, for example, was founded in 2004 – that is only 11 years ago. However, this is a daily, sometimes hourly, aspect of many students’ lives today and most have no memory of life without it and other similar ways of connecting globally.

This video produced by the Australian Institute for Teaching and School Leadership (AITSL) was shared with me by a peer. It helps to highlight the rapid growth in the future learning space as well as the impact and advantages these changes have for our students.

Considering that this video represents the momentum of much of the modern world’s educational focus today, where does that leave our Syrian refugee students? Many have had interrupted access to schooling throughout the last 4 years of conflict, but many have also ceased their education entirely. According to UNICEF, 68% of refugee children are not able to access schooling due to social, legal or economic barriers. With over 4.08 million refugees who have already fled Syria as of September 2015 it is estimated that half are children under the age of 18 years. Using UNICEF’s figures, that equates to approximately 1,387,000 refugee children under the age of 18 years who are not able to access education. 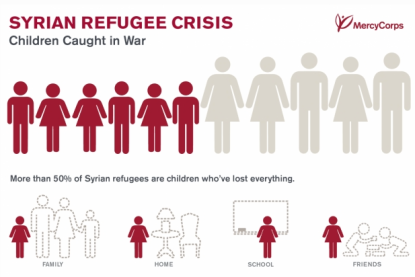 The gap that is apparent between the educational experiences of youth around the world today is certain to continue to widen unless the educational welfare of the Syrian refugees is addressed promptly.

Mercy Corps interviewed 150 Syrian refugee youths and asked for their words and pictures of what it was like growing up as a refugee. Their personal stories are emotional and moving, but importantly they demonstrate that they are all after a common goal – to be empowered and gain “recognition and respect for their skills and to contribute to their communities” (Streng, 2015).

Mercy Corps has recommended three main areas of focus in order to improve educational outcomes for the Syrian refugee youth.

Education is so much more than providing paper and pencils to learn literacy and numeracy skills. Yes, these skills are important, but so too are the abilities for refugee students to pursue future educational pathways, to develop a genuine connection to their community and for the ongoing psychosocial wellbeing of each child in order for them to contribute in meaningful and purposeful ways in the future. After all, these children are also 21st century learners.

I don’t think this is too much to ask, especially when you consider the educational luxuries that are available for other 21st century learners elsewhere around the world.

4 thoughts on “What role does 21st century education play for the children of Za’atari?”

Welcome to my little world of big learning through this wonderful medium of the world wide web. My picture of a giraffe (with thanks to my friend Stephen Walsh for taking this fabulous photo and allowing me to share it) is my idea of “sticking my neck out” and taking on new challenges of eLearning. I hope we can learn, share and inspire together.

Through the sharing of ideas, reflections, knowledge and resources  great teachers will become even greater

A network for connecting 21st Century Educators around the world

Learning spaces in our everyday lives

A learning space through which educators can connect and share their ideas, expertise and resources.